Table of Hope has never closed off meal distribution because of a snowstorm. But now they face a harsh winter and steepening hunger crisis. 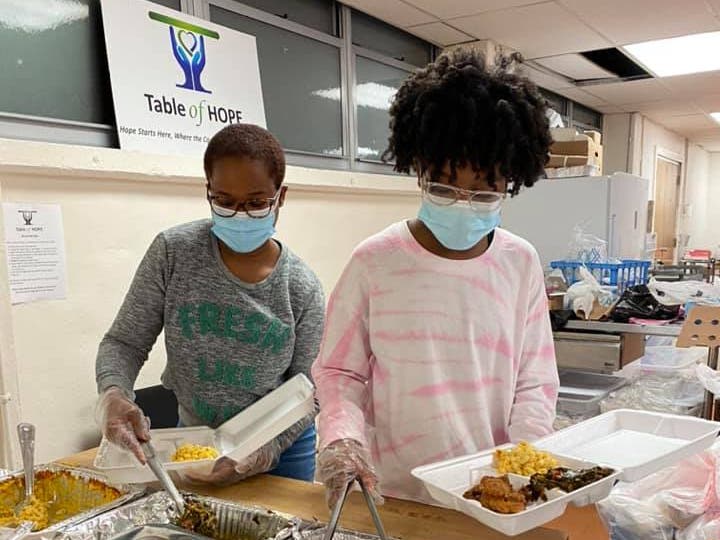 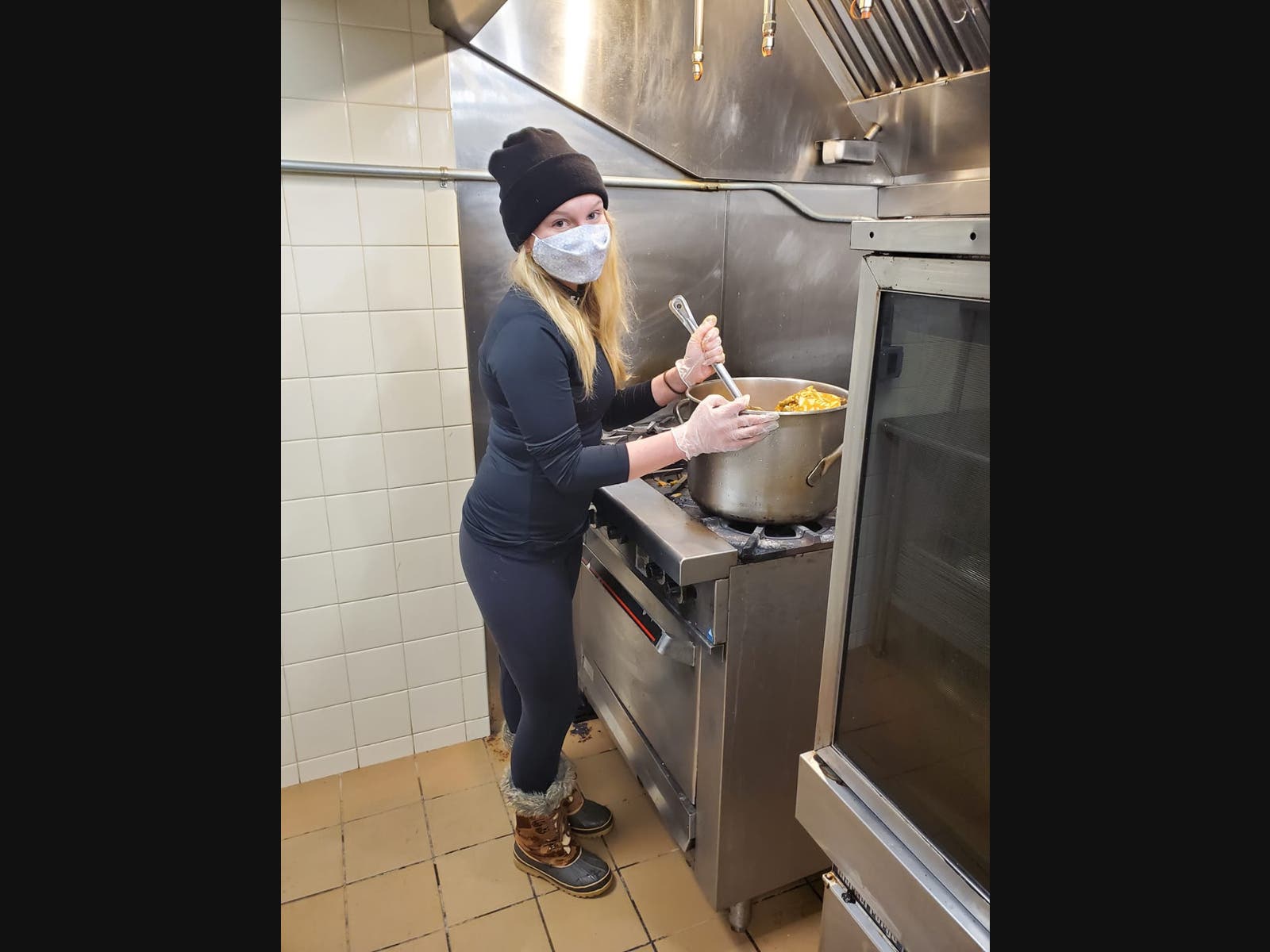 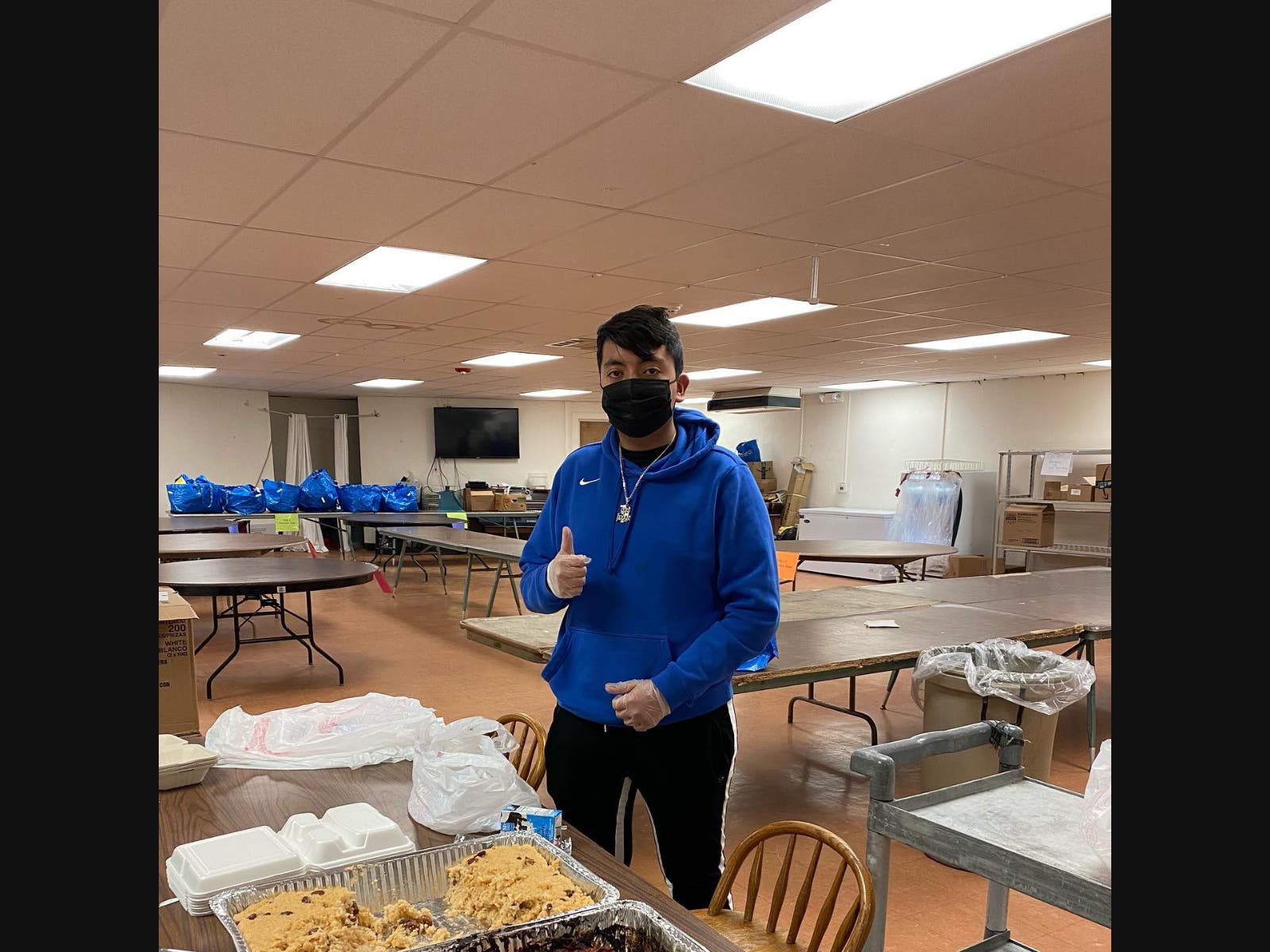 Table of Hope volunteers distribute hot meals on a rotating schedule in Morristown, Parsippany and Dover. (Courtesy of Table of Hope)

MORRISTOWN, NJ — As nearly 30 inches of snow pummeled Morristown, the kids enjoyed a snow day, businesses closed and many retreated into their homes to withstand the harsh nor’easter. But a small nonprofit feeding people inside a Morristown church pushed on, because not everyone has the privilege of enjoying the snow.

Table of Hope distributes hot meals to those in need, rotating between distribution sites in Morristown, Parsippany and Dover. The organization scheduled Feb. 1 for meals to-go at Bethel Church of Morristown.

New Jersey State Police responded to 661 crashes between 6 p.m. Jan. 31 and 8 p.m. Feb. 1. Morristown authorities spent much of the storm pushing disabled vehicles. ABC News even traveled to Morristown and showed the area’s dichotomy: a picturesque Morristown Green to your left and a ghost town of undrivable roads to your right.

Leaving home wasn’t safe, but neither is hunger. If Bethel Church and Table of Hope didn’t open their doors, who would?

“If there’s a chance of a snowstorm or it starts snowing, the lines at Walmart and ShopRite go from the back of the store to the front,” said Rev. Dr. Sidney S. Williams Jr., who runs Table of Hope. “Well, there’s a significant number of people who have the same need but don’t have the same resources to stock up.”

Their first pastor, Bishop Willis Nazery, was born a slave in 1803 in Virginia. For eight years, they met in each other’s homes until raising the funds necessary to build the Carpenter Gothic church on Spring Street in 1849.

Bethel became Morris County’s first Black congregation and served as the county’s only school for “Colored and Native American” children, according to the church’s history page. They expanded their facilities on Spring Street and remained in the same facility until 1967. Their current building arose in 1970.

But Hurricane Irene devastated the church in 2011, leaving 4 feet of water in the basement. Community members removed water from the basement, remediated mold and helped them renovate and establish a commercial kitchen.

That’s how Table of Hope formed, according to Williams, Bethel Church’s pastor.

“We’re just kind of really paying it forward,” Williams told Patch, “because if it hadn’t been for the community coming to our aid in 2011, there would be no more Bethel and there wouldn’t be a Table of Hope.”

Opening No Matter What

That’s why Table of Hope does whatever it takes to stay open. Since the organization began in 2013, they’ve never closed meal distribution because of a snowstorm, Williams says.

The pastor credits their committed volunteers. Williams can always count on them to clear snow, cook and help distribute hot meals.

They did it again Feb. 1, despite the snow beginning the evening before and falling until the day after. Thanks to the volunteers’ efforts, Table of Hope fed 65 people that night from 59 Spring St.

“We just have a really dedicated group of people that, barring some natural disaster, they’re committed to making sure our doors stayed open,” Williams said.

But New Jersey’s harsh winter has pushed on since, with sporadic snowstorms and frigid temperatures. And the coronavirus pandemic has only increased food insecurity throughout Morris County and the nation since winters past.

“Our members are reporting that many of the people they’re serving have never sought food assistance before,”Kathryn Strickland, Feeding America’s chief network officer, told Patch. “Some people are reporting that people who formerly donated to
food banks are now seeking assistance.”

Table of Hope sees the crisis right in front of them. About 500 people lined up in the cold Feb. 4 for food.

The organization fed them all. But seeing people line up in the cold for hot food illustrated the crisis at hand.

“That’s an indication of the need,” Williams said. “It’s cold. … The demand is just insane.”

Table Of Hope Needs Help Too

Despite Table of Hope’s resilience, the organization faces growing challenges. During meal distributions, they try to ensure everyone has access to meat, dairy and produce. But more often lately, Table of Hope has needed to purchase the food to meet the demand.

Williams noted two ways people can help: donations and volunteerism. People can donate and volunteer online. Table of Hope could especially use volunteers with experience in maintenance and repairs, according to Williams.

Those in need of food can also register online — registration is preferred but optional.

Forecasters, as of Wednesday morning, project another 6-8 inches of snow will hit Morristown on Thursday. No matter how much snow falls, Table of Hope expects to clear the way for the hungry at Bethel Church.

“At least we’re in a building,” Williams said. “We can go home to our warm homes. The least we can do is try to provide a meal and a cup of coffee to people that are in need.”

RANDOLPH — Isabel Loaiaza was behind the wheel of her Toyota minivan Wednesday morning outside the Morris Habitat for Humanity ReStore on Salem Street, patiently waiting for service in a long line of vehicles wrapped around the building.

She and her friends did not come to shop for discount furniture in the nonprofit retail store. They were there to put food on their tables. They were on line for the latest in a series of food-distribution events arriving via the Morristown-based Table of Hope and its Mobile Food Pantry bus.

“I’m out of work,” Loaiaza said, then pointed to her friends, from Morristown and Dover, respectively. “He’s out of work. She has a daughter she needs to take care of, so she can’t work.”

Theresa Williams, executive director of Table of Hope, said the the group was prepared to stock the pantries of up to 250 families with food staples like bread, eggs and milk, meat and fish, and other essential groceries.

“Everyone is welcome,” she said. “Tomorrow we’ll be in Morristown, and then we’ll be in Parsippany on Friday.”

Her husband, the Rev. Sidney Williams Jr., pastor of Bethel AME Church in Morristown and operator of the Spring Street Community Development Corporation, revved up Table of Hope right after the COVID-19 pandemic started to decimate the economy in March.

The school bus he had purchased to convert to mobile food distribution was quickly deployed to Parsippany, Dover, Morristown, Roxbury and other towns in Morris County, delivering food picked up at the Community Food Bank of New Jersey in Hillside. 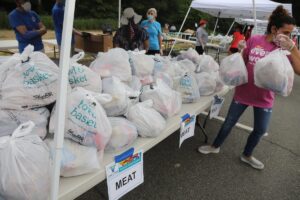 Since the coronavirus outbreak, Table of Hope has delivered more than 220 tons of food to more than 9,000 families.

“It depends on where we go whether we are seeing a decrease or increase in need, but generally, it’s still showing there is a great need,” Theresa Williams said. “The numbers have gone down slightly, but in Morristown they have not.”

Dover Mayor Carolyn Blackman expressed her appreciation for previous Table of Hope distributions in her town, and came to Randolph to volunteer.

“I had a big challenge in my town to make sure everybody had food on their table,” Blackman said. “Table of Hope has stepped up to the plate in every way to help me provide that.”

She joined other volunteers from Table of Hope and their hosts for the day, Morris Habitat for Humanity.

“Reverend Williams is on our board of directors, so we’ve been working with Table of Hope for the past couple of years,” said Blair Schleicher Wilson, CEO of Morris Habitat for Humanity. “They have this overwhelming need for help, and we’ve got a volunteer group and the ability to run logistics. A beautiful marriage really was formed.” 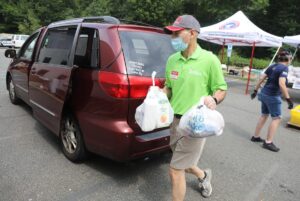 Lisa Strauss of Stroudsburg, Pennsylvania, traveled nearly an hour to Randolph to pick up food for her sister and brother-in-law in Bergen County. Both of them caught the coronavirus, she said, and her brother-in-law is now in rehab after surviving 47 days on a ventilator.

“We’re all together,” said Strauss, who lost her office job due to the pandemic. “We just hope everything is going to get better, for all of us.”

Libby Bernier-Spiess said she was a volunteer picking up a food supply for a client of Family Promise,  another nonprofit serving the homeless population in Morris County.

“This is my first time doing this,” she said. 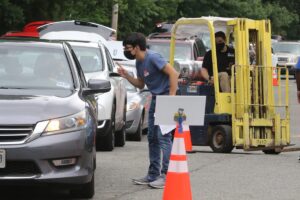 Randolph Mayor Christine Carey and most of the Township Council also showed up to volunteer.

“This is our third one that I’ve been to in Randolph,” Carey said. “We did one in May at the high school, and two weeks ago there was one at County College of Morris. People are challenged more than usual.”

“This needs to be a wake-up call to everybody in Morris County,” said another volunteer, District 25 Sen. Anthony Bucco. “While we pride ourselves on being a relatively affluent county, there are many, many folks that are struggling, that are living day-to-day. Today shows that without any doubt.”

Food-security issues related to the pandemic continue to show up in unexpected places, including Bergen County, where Ridgewood YMCA CEO Ernest Lamour launched a weekly food-distribution program that started with about two dozen families.

The Ridgewood Y program now provides groceries from the Community Food Bank of New Jersey to more than 200 families in need, by pickup appointment, on Wednesdays.

“It definitely exists,” Lamour said. “You’re starting to see a lot more of that within communities like Ridgewood. I knew there was a need even prior to the pandemic. This has been going on for quite some time. The pandemic has just taken it to the next level.”